Since Klassic Arcade 2.0 opened on June 30th, one thing has been missing that was a favorite at the old 1.0 location. Customers would ask about it, why we didn’t have it yet, would we be getting it, and most of all, WHEN would it make its triumphant return?

The good news is that our very own Klassic Root Beer is now back, and it’s better than ever! It’s the same root beer recipe that you love from the old location. Rich and creamy, with a good amount of foam on top, like any good root beer should have. You can get a 16 ounce cup for only $1.50 (or a 10 ounce cup for $1.00). Or, spend a little more and get a collectible Mr. Soda Pop pint glass for only $5.00 (it comes filled with root beer), and then you get unlimited $1.00 refills for life when you bring the glass back.

How is it better than ever? Because now that we carry Hershey’s Ice Cream, you can get a Klassic Root Beer float for only $3.00! We’ll combine vanilla ice cream with our delicious root beer for what my dad would call an “absolute taste treat”!

So stop in and have a glass of our Klassic Root Beer, or even get a root beer float. We’ll see you out there!

Well, it’s that time of the year again. The leaves have (mostly) fallen, Halloween is past us with Thanksgiving struggling not to get overlooked by Christmas. And the eternal debate is here once more: people that like pumpkin pie and people that are wrong don’t like pumpkin pie. That debate will not be settled here.

For those of us who do like pumpkin pie (and the Soda Jerk is definitely in the “I freakin’ LOVE pumpkin pie!” camp), Maine Root Handcrafted Beverages™ has again released their Pumpkin Pie Soda. Klassic Arcade got its hands on one case, so there is a limited supply. You’ll definitely want to grab a bottle or two before they run out (last year they sold out by Thanksgiving).

This is a very good soda pop, that really tastes its best on a chilly, gray fall day. (Trust me, you don’t want this on a warm summer day) With a definite presence of pumpkin spice in every sip, you will definitely taste the pumpkin pie flavor throughout the entire bottle. Seems like Maine Root knew just how much pumpkin spice to add so as to not overwhelm, but you will find that it comes right up to the line of being too much. This is not mild by any stretch, but it is never too strong. I think they did a fine job of balancing the amount of spice with the proper amount of sweetness.

So if you are a fan of pumpkin pie and haven’t tried Maine Root Pumpkin Pie Soda, head out to Klassic Arcade and try a bottle. Then get an extra bottle to take home and wait to enjoy it with a piece of pumpkin pie (which the Soda Jerk just might do after Thanksgiving dinner!)

Us Michiganders, we love our pop. Not soda, and frankly, not even soda pop. Just pop. We adore Faygo and Vernors, but there’s another pop that’s made in Michigan that’s not as known to as many people. That pop is Towne Club. You saw that right, “Town-with-an-e” Club. It may not be as widely known as those other Michigan-made pops, but it’s every bit as good, with 11 flavors available at Klassic Arcade 2.0.

Towne Club was started in the Detroit area in the early 1960’s as a less expensive alternative to Coke and Pepsi in the poorer neighborhoods. Customers would go into the “pop shop”, fill up their wooden crate with 24 ounce glass bottles, then bring the empties back and do it all over again. While the company fell on some hard times in the early 1980’s, Towne Club never completely went away, and with its 16 ounce screw-top bottles, it still has a niche place in the pop market. Those people that know Towne Club know that the assortment of flavors is absolutely top-notch.

The wide variety of flavors available at the arcade includes Root Beer, Michigan Cherry, “Honolulu Blue” Cream Soda, Strawberry Melon, Mango Orange, and six others. There’s something for everyone, and each flavor is delicious. My favorite is the “Honolulu Blue” Cream Soda (even though I’m not a Lions fan), with the Root Beer coming in a very close second. Kids love the bright colors, and adults love the nostalgia that comes from drinking some classic pop in a glass bottle.

So, next time you’re at Klassic Arcade 2.0, grab yourself a bottle of Towne Club and enjoy! 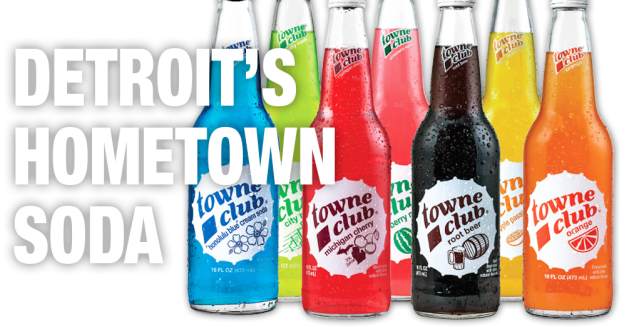